In January 2011, the second iteration of the Plat_Forms contest had been conducted by FU Berlin Heise and OSBF. 16 Teams with 3 developers each were all given the same task. They had to implement as much as possible of the given requirements in a given time span in a controlled environment. After the event, the resulting code has been evaluated by the team around Prof. Lutz Prechelt and Ulrich Stärk. The results were then presented on November 25, 2011.

For the PHP Side, i was asked to select the participants. To provide a good coverage of current PHP best practices, i selected 2 zend framework teams, 1 symfony team and a flow3 team (as an additional influence besides the general purpose frameworks).

After the great success of PHP in the previous contest in 2007, we expected after all the improvements in the PHP space during the last years, that PHP would be even more successful than before. But we were supprised: 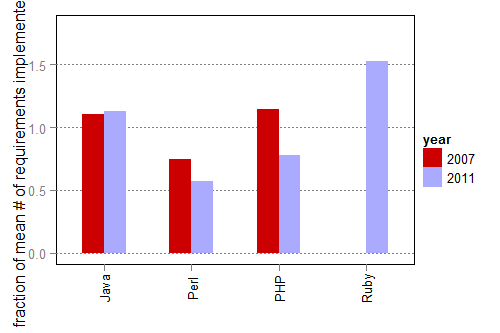 So how can this be interpreted?

Java was almost constant, slightly improved coverage. Perl decreased somewhat, that might be discussed elsewhere. Ruby was very good, but there was no numbers for 2007 so no trend can be derived here.

But what happened to PHP? Less coverage than 2007 and much less consistency between the teams (one quite good, the other 3 rather bad). Did we select the wrong teams? Did they have a bad day?

Why did all the work the PHP community did during the last years in terms of software architecture, frameworks and quality not lead to better productivity?

Ok, the results for robustness have improved compared to 2007 for PHP. But the size of PHP applications was less consistent than in 2007: Some PHP applications were quite compact, others were as big as the Java applications but while covering less functionality.

To me these results match my observations during the last years in PHP space. The idea of PHP being "super-productive" needs to be questioned at least. Maybe the PHP community is on a journey and the destination has not been reached yet. We will see with the results of the next iteration of this contest...

While Ruby Teams spent much more time writing automated tests than everybody else, they still got the highest functional coverage.

While in 2007 the PHP teams were most interested in customer's wished, in 2011, Ruby asked the most detail questions.